After 45 years in business, NBC’s greatest success is it has gained a great reputation of producing a high level of quality of products and with a large capacity to produce them for domestic and foreign customers. NBC also has built a strong and united staff, who always aim for higher goals.

NBC has developed into a corporation with 38 member units, 30,000 employees and 25.000 pieces of modern specialized machinery operating in various fields and locations all over the country.

NBC was founded with two garment factories named Ledgine and Jean Symi in Saigon Export Processing Zone, which have been operating since before 1975.

After the unification in 1975, the Department of Light Industry took over these two factories and changed their names into Export Processing Zone Garment Factory. The number of employees who worked in the factories at that time was about 200.

The early 1990’s was the period of strong development of the textile and garment industry. It became the main force in Vietnam’s export-oriented socioeconomic development strategy. In order to address the needs of strong economic units to accomplish the strategic task of the industry, on March 1992, the Ministry of Industry decided to found Nha Be Garment Company based on the foundation of Nha Be Garment Factory.

Also in this period, the company implemented various in-depth investment plans introducing processes, technology, state of the art equipments, and increasing workers’ skills. The goal was creating major product ranges such as suits, high-value shirts, etc. This could create the competitive advantage and were directed to markets like America, Japan and EU. Until now, Nha Be Garment has been being assessed as the leader of Vietnam in suit production.

In 2008, the company had a lot of changes in orientation, organization and domestic market development. It re-organized its departments to streamline production processes, separated some functions to form member units, and expanded operation to high potential areas.

The domestic market became a focus of NBC’s operation with many large-scale plans. NBC renovated its vital tasks such as market researching and product designing, and introduced new brands and extended its distribution system throughout the entire country.

Following the success with processing orders for domestic and export markets, NBC continued to invest heavily in the form of FOB. 2011 marked this event when NBC proceeded with the construction of separate areas for foreign professionals and selected staff employees ... The export value of NBC in 2012 reached about USD420 million, of which the ratio of FOB orders accounted for 50% of total exports value. 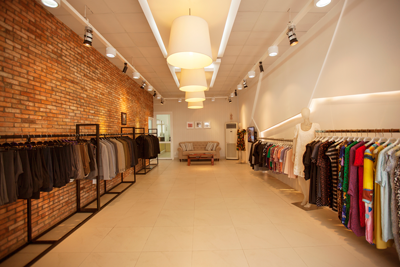 Entering 2013, the garment and textile sector was faced with great opportunities and challenges with a series of free trade agreements (FTA) under negotiation. NBC promoted the development of the ODM method mainly based on the foreign experts who catch the fashion trends, market tastes very well together with capable designers and strong sales teams who perfect the whole supply chain, contributing to enhance the production value, increase competitiveness and create a strong foothold in the market.

By 2015, it marked a turning point of NBC upon introduction of Lean manufacturing and Lean ERP monitoring systems across the entire system. Productivity and quality were improved when eliminating waste and improper in production processes in order to reduce production costs thereby enhancing competitiveness, creating a firm belief in customers.

Nha Be – Soc Trang Factory - a member of Nha Be Garment Joint Stock Company (NBC) opened and went into operation the first phase at Highway 60, Ward 7, Soc Trang City, Soc Trang Province. Construction Scale with an area of 6 hectares, a total investment cost of 300 billion, investment in infrastructure is spacious, modern equipment and machinery. The factory operation created jobs for 4,000 workers in the locality and surrounding areas in the first and second phases. Nha Be – Soc Trang Factory is a unit specialized in garment and fashion production with major product lines such as jeans, khaki and other fashion categories.

To diversify our products in order to serve the urgent needs of market during this crisis, NBC has been flexible in finding raw materials, organizing production, investing in technology to develop mask products and medical protective clothing. Produced on modern production lines with strict quality control, many kinds of products such as 2-layer, 3-layer, 4-layer antibacterial fabric masks, medical masks, medical protective clothing. NBC has been certified by international standards, domestic and foreign organizations in the protection of public health. Currently NBC is a satisfied partner of Walmart, Costco, Aoki,… in the US, Canada, Europe, Japan,…